Sullivan Goss – An American Gallery is proud to announce the new exhibition of kinetic sculpture by Ken Bortolazzo. Working with stainless steel, Bortolazzo has established himself as one of the country’s foremost metal sculptors. In his newest body of work, he continues a departure from his past Optikinetic work, experimenting with wall­mounted works and colored lighting effects.

Where previously the aesthetic of his sculptures worked from the angularity of planes and panels of steel, he has now softened his edges and angles to create whimsical, biomorphic, and lyrical works. As has always been the case with Ken’s sculpture, the appeal of his new work relies upon the masterful juxtaposition of his heavy metal materials with the grace of their movement. The use of organic forms and curved lines accentuates the effortlessness with which these works seem to come alive.

Bortolazzo discovered his creative passion for welded sculpture at an early age. Working primarily in stainless steel as well as bronze, copper, silver and gold, he collaborated with many prominent artists, including Julio Agostini, Kenneth Noland and most importantly, George Rickey. During their twelve year working relationship, Ken evolved from studio assistant to Rickey’s acknowledged colleague. He remains a conservator of Rickey's work for the estate. Bortolazzo skillfully mastered the use of stainless steel and the custom designed pivots and bearings used in Rickey's renowned kinetic works. This valuable experience inspired Bortolazzo's own work, and his highly geometric shapes soon emerged with greater regularity; taking on a persona of their own. Today Bortolazzo's sculptures span many artistic modes, from small, intimate pieces and works of kinetic playfulness to large monumental sculpture. He brings aesthetics, science, mechanical skill and an illusionist's insight to all he creates. 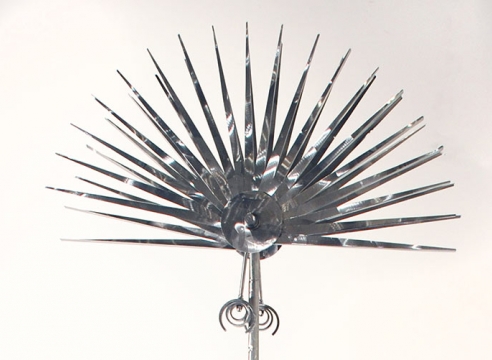 Ken Bortolazzo
Back To Top